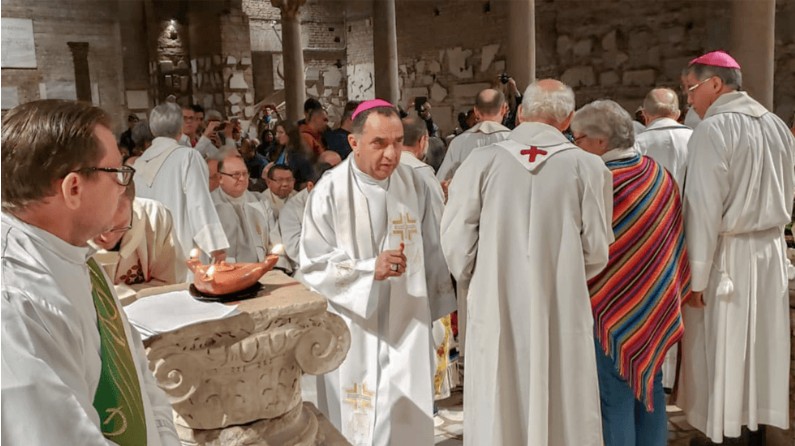 For a Church with an Amazonian face, poor and servant, prophetic and Samaritan

We, the participants of the Pan-Amazon Synod, share the joy of living in the midst of numerous indigenous peoples, “quilombolas,” inhabitants of riverbanks, migrants and communities in the peripheries of the cities of this immense territory of the planet. We have experienced with them the strength of the Gospel that acts in the poor. The encounter with these peoples challenges us and invites us to a simpler life of sharing and gratuitousness. Marked by listening to their cries and tears, we heartily welcome the words of Pope Francis:

“So many of our brothers and sisters in Amazonia are bearing heavy crosses and awaiting the liberating consolation of the Gospel, the Church’s caress of love. For them, with them, let us journey together.” 1

We recall with gratitude those bishops who, in the Catacombs of Santa Domitilla at the end of Vatican Council II, signed The Catacombs’ Pact of the Poor and Servant Church2 We remember with veneration all the martyrs that were members of the base ecclesial communities, of pastoral and popular movements; the indigenous leaders, missionaries, lay people, priests and bishops, who shed their blood for this option for the poor, for defending life and fighting for the protection of our Common Home. 3 We join in gratitude for their heroism with our decision to continue their struggle with tenacity and courage. It is a feeling of urgency that prevails in the face of aggressions that today devastates the Amazon territory, threatened by the violence of a predatory and consumerist economic system.

Before the Holy Trinity of our particular Churches the Churches of Latin America and the Caribbean, and those who stand in solidarity with us in Africa, Asia, Oceania, Europe and on the continent of North America, and at the feet of the apostles Peter and Paul and the multitude of martyrs of Rome, Latin America and, especially, of our Amazon, and in deep communion with the successor of Peter, we invoke the Holy Spirit and we commit ourselves, personally and communally, to the following:

1. To assume, in the face of extreme global warming and the depletion of natural resources, the commitment, in our territories and with our attitudes, to defend the Amazon jungle. From it comes the gifts of water for much of the South American territory, the contribution to the carbon cycle, and the regulation of the global climate, an incalculable biodiversity and a rich socio-diversity for humanity and the entire earth.

2. To recognize that we are not the owners of Mother Earth, but rather the sons and daughters, formed from the dust of the ground (Gen. 2: 7-8),4 guests and pilgrims (1 Pet. 1: 17b and 1 Pet. 2:11).5 called to be its jealous caregivers and caretakers (Gen. 1: 26)6. For this we commit ourselves to an integral ecology in which all is interconnected, the human race and all creation, because all beings are sons and daughters of the earth and over them the Spirit of God moves. (Gen. 1:2).

3. To welcome and renew every day the covenant of God with everything created: “Behold, I establish my covenant with you and your descendants after you, and with every living creature that is with you, the birds, domestic and wild animals of the earth, as many as came out of the ark (Gen. 9:9-10 and Gen 9:12-17)7.

4. To renew in our churches the preferential option for the poor, especially for native peoples, and, together with them to guarantee their right to be protagonists in society and in the Church. To help them preserve their lands, cultures, languages, stories, identities and spiritualities. To grow in the awareness that they must be respected, locally and globally and, consequently, to encourage, by all means within our reach, that they be welcomed on an equal footing in the world concert of peoples and cultures.

5. To abandon, consequently, in our parishes, dioceses, and groups all types of colonist mentality and posture, welcoming and valuing cultural, ethnic and linguistic diversity in a respectful dialogue with all spiritual traditions.

6. To denounce all forms of violence and aggression toward the autonomy and rights of native peoples, their identity, their territories, and their ways of life.

7. To announce the liberating novelty of the Gospel of Jesus in welcoming the other and the one who is different, as happened with Peter in the house of Cornelius: “You yourselves know how unlawful it is for a Jew to associate with or to visit anyone of another nation; but God has shown me that I should not call any man profane or unclean.” (Acts 10:28).8

8. To walk ecumenically with other Christian communities in the inculturation and liberating proclamation of the Gospel with other religions and people of good will, in solidarity with original peoples, with the poor and the small, in defense of their rights and the preservation of our Common Home.

9. To establish in our particular Churches a synodal lifestyle where representatives of original peoples, missionaries, lay people, because of their baptism and in communion with their pastors, have voice and vote in the diocesan assemblies, in pastoral and parish councils and, ultimately, everything that concerns the governance of the communities.

10. To engage in the urgent recognition of the ecclesial ministries that already exist in the communities, exercised by pastoral agents, indigenous catechists, ministers of the Word, valuing in particular their care in the presence of the most vulnerable and excluded.

12. To recognize the services and real diakonia of a great number of women who today direct communities in the Amazon and seek to consolidate them with an adequate ministry of women leaders of the community.

13. To seek new paths of pastoral action in the cities where we operate, with the prominence of the laity, with attention to the peripheries and migrants, workers and the unemployed, students, educators, researchers and the world of culture and communication.9

14. To assume before the avalanche of consumerism a happily sober lifestyle, simple and in solidarity with those who have little or nothing; to reduce the production of garbage and the use of plastics, favoring the production and commercialization of agro-ecological products, and using public transport whenever possible.

15. To place ourselves on the side of those who are persecuted for their prophetic service of denouncing and repaying injustices, of defending the earth and the rights of the poor, of welcoming and supporting migrants and refugees. Cultivate true friendships with the poor, visit the simplest people and the sick, exercise the ministry of listening, comfort and support that brings encouragement and renew hope.

Aware of our fragility, of our poverty and smallness in the face of such great and serious challenges, we commit ourselves to the prayer of the Church. That, above all, our ecclesial communities help us with their intercession, their affection in the Lord and, when necessary, with the charity of fraternal correction. We welcome with an open heart the invitation of Cardinal Hummes to allow ourselves to be guided by the Holy Spirit during these days of the Synod and upon the return to our churches: “Allow yourselves to be enveloped by the cloak of the Mother of God, Queen of Amazonia. We must not allow ourselves to be overcome by self-referentiality, but by mercy when faced with the pain expressed by the poor and the earth. We will need to pray a great deal, to meditate and discern a real practice of ecclesial communion and a synodal spirit. This Synod is like a table that God has prepared for His poor and He is asking us to serve at that table.”10 We celebrate this Eucharist of the Covenant as “an act of cosmic love. ” “Yes, cosmic! Because even when it is celebrated on the humble altar of a country church, the Eucharist is always in some way celebrated on the altar of the world.” The Eucharist joins heaven and earth; it embraces and penetrates all creation. The world that came forth from God’s hands returns to him in blessed and undivided adoration: in the bread of the Eucharist, “creation is projected toward divinization, toward the holy wedding feast, toward unification with the Creator himself.” Thus, the Eucharist is also a source of light and motivation for our concerns for the environment, directing us to be stewards of all creation.”11

2 The Catacomb’s Pact of the Poor and Servant Church: Catacombs of Santa Domitilla, Rome, November 16, 1965. The Pact signed by 42 concelebrants immediately received support from 500 conciliar fathers.

4 “7 then the Lord God formed man of dust from the ground, and breathed into his nostrils the breath of life; and man became a living being. 8 And the Lord God planted a garden in Eden, in the east; and there he put the man whom he had formed.”

8 34 And Peter opened his mouth and said: “Truly I perceive that God shows no partiality, 35 but in every nation anyone who fears him and does what is right is acceptable to him. (Acts 10: 34-35)

Congregation of the Mission